"Courage, above all things, is the first quality of a warrior."
~ Carl von Clausewitz

There are 329 visitors online

Peta's Slaughterhouse for Dogs and Cats

from terrierman's blog, a good one, also a month or so old. the graphic definitely shows a increasing trend towards kill, kill, kill.

please note my (dark red) link about ken cuccinelli. he has a track record of fighting the extremist agenda already!


Peta's Slaughterhouse for Dogs and Cats

This morning comes word that in 2008 PETA killed 95.8 percent of the dogs, cats and other pets put into its care last year.

In fact, during all of 2008, PETA found adoptive homes for just seven pets out of 2,216 animals taken in.

PETA has a long track record of killing healthy animals (see pictures here), and almost no discernable track record that I can find of placing dogs and cats in loving homes.

As Dana Cheek, the former director of the Norfolk SPCA wrote:


I often receive phone calls from frantic people who have surrendered their pets to PETA with the understanding that PETA will "find them a good home." Many of them are led to believe that the animals will be taken to a nearby shelter. Little do they know that the pets are killed in the PETA van before they even pull away from the pet owner's home ‘¦ PETA refuses to surrender animals they obtain to area shelters for rehoming. If only the celebrity 'deep-pocket' donors on the west coast knew that their donations were going to kill adoptable cats and dogs here in Norfolk.

You will not find PETA's shelter in Norfolk, Virginia on Pet Finder, nor are there any visiting hours. Posters are not placed on coffee shop bulletin boards, nor do they work with PetSmart or anyone else to find homes for the dogs and cats relenquished to them.

Instead, PETA injects killing solutions into almost all the animals handed over to the them, and then it contracts with a waste disposal company to have several tons of animals a month trucked away, out of sight and out of mind.

Why? Simple: they believe a dog in a shelter is better dead than kenneled for even a few days or a few weeks, and they oppose pet ownership entirely. PETA's Norfolk staff cannot be bothered to take time away from media-whoring in order to do the tough work involved in actually rehoming animals. They leave that to real shelters.

PETA, of course, tries to hide all of this, but the state of Virginia is not having any part of it.

Virginia has a legal requirement that all shelters report out how many dogs, cats and other animals are surrendered, how many are placed, and how many are rehomed.

PETA refuses to fill out the forms as asked by the state of Virginia, however, and every year a little charade occurs. This charade appears to be designed to slow down the posting of PETA's kill information to the Virginia Department of Agriculture and Consumer Services website. PETA, it seems, is embarassed by their own numbers. Not embarassed enough to change what they do, mind you, but just embarassed enough to try to keep comparative data away from the public's prying eyes.

And so, instead of reporting the data in the form requested, PETA mixes in unrelated spay and neuter data. They have done this for several years running now, and apparently they are doing it again this year, as the numbers are still not up on the Virginia state web site. PETA will eventually cough up the forms properly filled out, of course, but by then several months will have gone by. Heck, several months have already gone by.

To be clear, no other shelter in Virginia does this or even tries to do this. And you know why? Because the other shelters are not afraid of telling you what they are doing because most of them are at least trying to get dogs and cats adopted out.

PETA, on the other hand, seems to do virtually nothing to try to get animals placed. That's too much like work and there's no "look-at-me" publicity in it. The blue solution of death is so much easier. And so PETA injects, dumps, and runs off to do another titty-show protest somewhere. Yippee! Look at me. I am nekkid!

Simple: Just because PETA intentionally mangles the paperwork so that the data does not show up up on time on the Virginia state web site does not mean that they do not file something as a place holder. That paperwork does exist, and you can read it yourself right here and tease out the kill data, just as I have. 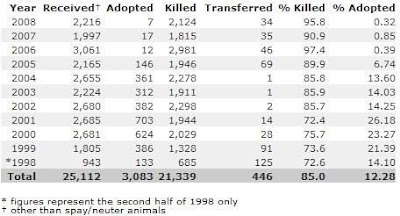 To cut to the chase, here's how the data breaks down for dogs and cats put in PETA's care in 2008:
Now here's the important part: PETA is very clearly in violation of Virginia state law.

But don't take my word for it. Here what PETA's Daphna Nachminovitch said in court:


"PETA does not maintain an animal shelter. PETA has a couple -- we call them 'quarantine rooms' -- which are used to house animals that are held for one reason or another. And animals who are, who have a chance for adoption, are usually fostered in private homes. We do not have a public facility that's open to the public where people can stroll through and pick an animal. That's not a service that we are able to provide. We're an office building."

Right. You are an office building. Not a shelter.

Under Virginia law, an animal shelter means "a facility, other than a private residential dwelling and its surrounding grounds, that is used to house or contain animals and that is owned, operated, or maintained by a nongovernmental entity including, but not limited to, a humane society, animal welfare organization, society for the prevention of cruelty to animals, or any other organization operating for the purpose of finding permanent adoptive homes for animals."

Under Virginia law, a humane society means "any incorporated, nonprofit organization that is organized for the purposes of preventing cruelty to animals and promoting humane care and treatment or adoptions of animals."

Under Virginia law, adoption means "the transfer of ownership of a dog or a cat, or any other companion animal, from a releasing agency to an individual."

In short, PETA is not running a legal shelter or humane society (as Ms. Nachminovitch conceded in court), and therefore their licensed access to killing chemicals should be revoked by the state.

PETA can then re-apply with the Virginia Department of Agriculture to run a slaughter house if they so choose.

And no, the slaughter house designation is not hyperbole.

In 2008, PETA's shelter in Norfolk, Virginia took possession of 2,216 dogs, cats, and other ‘companion animals‘ and killed all but 7 of them -- a 95.8 percent kill rate once the tranfers are accounted for.

What's that look like? Well, if the average dog/cat weighs 30 pounds, that works out to be about 30 TONS of dead animals coming out of PETA's shelter every year.
...
Want to do something positive about all this? Here's my suggestion: Send a letter to all the candidates hoping to be Virginia's next Attorney General.

Ask each of the candidates to make a pledge to investigate, prosecute and/or close PETA's Norfolk animal shelter, which is being run as an unlicensed slaughter house, not as a true animal shelter seeking to find homes for adoptable animals. Send them a link to this blog for the statistics and the law.